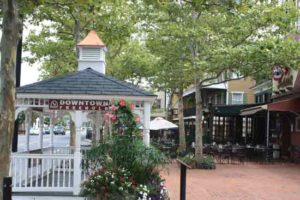 Freehold was first sighted by European Venetian John Cabot while sailing along the coast in 1498. The Lenni Lenape Indians originally inhabited the area called Freehold Township. It wasn’t until September 1609 that the first European actually set foot at Sandy Hook.  The Dutch West India Co. was founded in 1602 and granted a charter that included North America in 1621.  They developed commerce in the New World and in 1623 organized the New Jersey-Hudson River area into the Province of New Netherlands. On June 23, 1664, the Duke of York granted a patent to Sir George Carteret and John, Lord Berkely for the entire area of what now constitutes New Jersey. The area was first settled in 1685 by a group of Scottish reformers fleeing religious persecution. Freehold Township was formally established by an act of the Legislature on October 31, 1693, one of the three original townships in Monmouth County. We celebrated our Tricentennial in 1993.

Throughout the intervening three centuries, it has been a place where people could raise their families, earn their living and live out their lives in some measure of peace. Then as now, it has been a community of farms and churches, homes and neighborhoods. It has strong roots in a rich colonial tradition and illustrious past. The Battle of Monmouth (probably the turning point of our War of Independence) was fought at its doorsteps on a scorching day in June 1778. Every major American military leader of the time participated: George Washington, Marquis de Lafayette, Benedict Arnold, Anthony Wayne, Charles Lee, Alexander Hamilton, Nathaniel Greene, Friedrich van Steuben and the non-military Molly Pitcher. Most of the history made here, however, has been of the personal kind; of families and arms and small businesses, and the enduring values these institutions produce now and in the future. We invite all residents to know some of the heritage and become part of it.

In the early 20th century, the farms in Freehold Township continued to be prosperous and successful, and the area steadily grew in population. However, after World War II, the Township experienced rapid growth. By this time, transportation systems had increased to a point to allow workers to commute daily to jobs in larger cities, such as Newark, Philadelphia, and New York City. Highways, including U.S. Route 9 and Route 33 helped to make it possible for commuters to live in Freehold and work in nearby cities. The township quickly developed large neighborhoods of suburban single family homes. Soon, the Township began to grow commercial and industrial businesses that rivaled the Borough. Among the corporations that opened production factories in Freehold include Nestlé in 1948 and 3M in 1957. In 1971, a major medical complex, originally called Freehold Area Hospital, and today called CentraState Medical Center, opened in the Township. Not all industrial developments in the Township were positive. In 1983, the United States government designated the Lone Pine Chemical Site in the Township as a Superfund site, one of the worst environmental disasters in the country. In 1990, with the opening of Freehold Raceway Mall, the second-largest mall in the state, the Township become a primary commercial center for Central New Jersey.