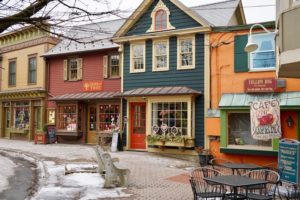 In 1805, Frenchtown founder Paul Henri Mallet-Prevost is said to have built the town’s first hotel to serve the river and ferry traffic. The town was a favorite stop-over for people traveling by horse and carriage, or by riverboat, between New York and Philadelphia. In those days, the Frenchtown Inn was called the “Warford House,” and Frenchtown was known as the “Sunbeam Town,” named by its settlers, the French Huguenots. In 1838, the present hotel was completed and named the “Railroad House,” in anticipation of the Phillipsburg-to-Trenton rail line that would open through Frenchtown 15 years later. You can still see the mile markers enumerating the miles between these two destinations along the towpath that runs along the Delaware River. In 1875, the small hotel grew as the town prospered, with thriving local mills, river traffic, and of course, the railroad, which passed right by the Inn on the still-existing towpath. The 1900’s saw the hotel prosper with the Roaring Twenties, and then gradually slide into disrepair with the Depression and the decline of river traffic and the railroad. The author Nathaniel West resided in these halls during the 1930’s, where he wrote most of his works. After his death in 1940, the Inn operated again as a tavern and boarding house, under various owners throughout the years.

Since 1985, an on-going renovation project was started. The first floor was transformed into three beautiful dining rooms and a bar area, which resulted in a fine dining restaurant in Frenchtown. The restaurant has perennially been rated among the top in the State. In 1996, Tom, Laura, Andrew, and Colleen Tomko purchased the Frenchtown Inn, and uphold its reputation for fine cuisine. Frenchtown is governed under the Borough form of New Jersey municipal government. The governing body consists of a Mayor and a Borough Council comprising six council members, with all positions elected at-large on a partisan basis as part of the November general election. A Mayor is elected directly by the voters to a four-year term of office. The Borough Council consists of six members elected to serve three-year terms on a staggered basis, with two seats coming up for election each year in a three-year cycle. The Borough form of government used by Frenchtown, the most common system used in the state, is a “weak mayor / strong council” government in which council members act as the legislative body with the mayor presiding at meetings and voting only in the event of a tie. The mayor can veto ordinances subject to an override by a two-thirds majority vote of the council. The mayor makes committee and liaison assignments for council members, and most appointments are made by the mayor with the advice and consent of the council.