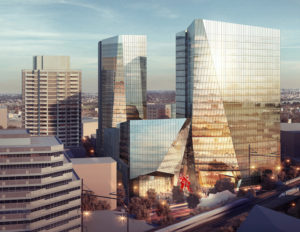 New Brunswick is a city in Middlesex County, New Jersey, United States, in the New York City metropolitan area. The city is the county seat of Middlesex County, and the home of Rutgers University. New Brunswick is on the Northeast Corridor rail line, 27 miles (43 km) southwest of Manhattan, on the southern bank of the Raritan River. As of 2018, New Brunswick had a Census-estimated population of 56,100, representing a 3.1% increase from the 55,181 people enumerated at the 2010 United States Census, which in turn had reflected an increase of 6,608 (+13.6%) from the 48,573 counted in the 2000 Census. Due to the concentration of medical facilities in the area, including Robert Wood Johnson University Hospital and Saint Peter’s University Hospital, as well as Rutgers, The State University of New Jersey’s Robert Wood Johnson Medical School, New Brunswick is known as both the Hub City and the Healthcare City. The corporate headquarters and production facilities of several global pharmaceutical companies are situated in the city, including Johnson & Johnson and Bristol-Myers Squibb. New Brunswick is noted for its ethnic diversity. At one time, one-quarter of the Hungarian population of New Jersey resided in the city and in the 1930s one out of three city residents was Hungarian. The Hungarian community continues as a cohesive community, with the 3,200 Hungarian residents accounting for 8% of the population of New Brunswick in 1992. Growing Asian and Hispanic communities have developed around French Street near Robert Wood Johnson University Hospital.

Centrally located between New York City and Philadelphia along an early thoroughfare known as the King’s Highway and situated along the Raritan River, New Brunswick became an important hub for Colonial travelers and traders. New Brunswick was incorporated as a town in 1736 and chartered as a city in 1784. It was incorporated into a town in 1798 as part of the Township Act of 1798. It was occupied by the British in the winter of 1776–1777 during the Revolutionary War.

The Declaration of Independence received one of its first public readings, by Col. John Neilson, in New Brunswick on July 9 (or 10), 1776, in the days following its promulgation by the Continental Congress.  A bronze statue marking the event was dedicated on July 9, 2017, in Monument Square, in front of the Heldrich Hotel. The Trustees of Queen’s College (now Rutgers University), founded in 1766, voted by a margin of ten to seven in 1771 to locate the young college in New Brunswick, selecting the city over Hackensack, in Bergen County, New Jersey. Classes began in 1771 with one instructor, one sophomore, Matthew Leydt, and several freshmen at a tavern called the ‘Sign of the Red Lion’ on the corner of Albany and Neilson Streets (now the grounds of the Johnson & Johnson corporate headquarters); Leydt would become the university’s first graduate in 1774, when he was the only member of the graduating class. The Sign of the Red Lion was purchased on behalf of Queens College in 1771, and later sold to the estate of Jacob Rutsen Hardenbergh in 1791. Classes were held through the American Revolution in various taverns and boarding houses, and at a building known as College Hall on George Street, until Old Queens was completed and opened in 1811. It remains the oldest building on the Rutgers University campus. The Queen’s College Grammar School (now Rutgers Preparatory School) was established also in 1766, and shared facilities with the College until 1830, when it located in a building (now known as Alexander Johnston Hall) across College Avenue from Old Queens. After Rutgers University became the state university of New Jersey in 1945, the Trustees of Rutgers divested itself of Rutgers Preparatory School, which relocated in 1957 to an estate purchased from the Colgate-Palmolive Company in Franklin Township in neighboring Somerset County.