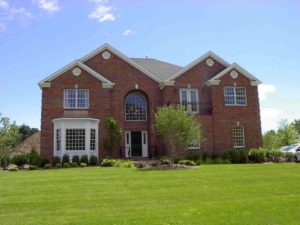 At the time of first European contact, Bergen County was inhabited by Native American people, particularly the Lenape Nation, whose sub-groups included the Tappan, Hackensack, and Rumachenanck (later called the Haverstraw), as named by the Dutch colonists. Some of their descendants are included among the Ramapough Mountain Indians, recognized as a tribe by the state in 1980. Their ancestors had moved into the mountains to escape encroachment by Dutch and English colonists. Their descendants reside mostly in the northwest of the county, in nearby Passaic County and in Rockland County, New York, tracing their Lenape ancestry to speakers of the Munsee language, one of three major dialects of their language. Over the years, they absorbed other ethnicities by intermarriage.

In the 17th century, the Dutch considered the area comprising today’s Bergen and Hudson counties as part of New Netherland, their colonial province of the Dutch Republic. The Dutch claimed it after Henry Hudson (sailing for the Dutch East India Company) explored Newark Bay and anchored his ship at Weehawken Cove in 1609. From an early date, the Dutch began to import African slaves to fill their labor needs. Bergen County eventually was the largest slaveholding county in the state. The African slaves were used for labor at the ports to support shipping, as well as for domestic servants, trades, and farm labor. Early settlement attempts by the Dutch included Pavonia (1633), Vriessendael (1640), and Achter Col (1642), but the Native Americans repelled these settlements in Kieft’s War (1643–1645) and the Peach Tree War (1655–1660). European settlers returned to the western shores of the Hudson River in the 1660 formation of Bergen Township, which would become the first permanent European settlement in the territory of present-day New Jersey.

During the Second Anglo-Dutch War, on August 27, 1664, New Amsterdam’s governor Peter Stuyvesant surrendered to the English Navy. The English organized the Province of New Jersey in 1665, later splitting the territory into East Jersey and West Jersey in 1674. On November 30, 1675, the settlement Bergen and surrounding plantations and settlements were called Bergen County in an act passed by the province’s General Assembly. In 1683, Bergen (along with the three other original counties of East Jersey) was officially recognized as an independent county by the Provincial Assembly.

Initially, Bergen County consisted of only the land between the Hudson River and the Hackensack River, extending north to the border between East Jersey and New York. In January 1709, the boundaries were extended to include all of the current territories of Hudson County (formed in 1840) and portions of the current territory of Passaic County (formed in 1837). The 1709 borders were described as follows: “Beginning at Constable’s Hook, so along the bay and Hudson’s River to the partition point between New Jersey and the province of New York; along this line and the line between East and West Jersey to the Pequaneck River; down the Pequaneck and Passaic Rivers to the sound; and so following the sound to Constable’s Hook the place of beginning.” The line between East and West Jersey here referred to is not the line finally adopted and known as the Lawrence line, which was run by John Lawrence in September and October 1743. It was the compromise line agreed upon between Governors Daniel Coxe and Robert Barclay in 1682, which ran a little north of Morristown to the Passaic River; thence up the Pequaneck to forty-one degrees of north latitude; and thence by a straight line due east to the New York State line. This line being afterward objected to by the East Jersey proprietors, the latter procured the running of the Lawrence line.